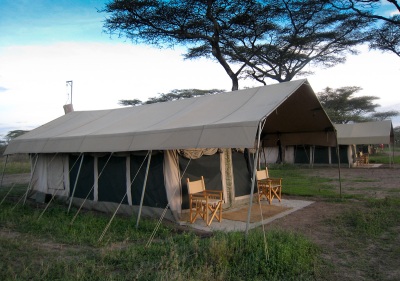 Having an opportunity to work for two weeks in an orphanage in Ilula, Tanzania, was exciting and rewarding enough; however, it became clear that we needed to arrange an extended tour of that magnificent country. This meant creating our Tanzanian bucket list:

Knowing we would be in Tanzania in early February meant we had a good chance of witnessing the Great Migration of wildebeest and zebra. In addition to staying in lodges in Ngorongoro and the Serengeti, we included a two night stay at the Olakira Tent Camp, located in the Southern Plains of the Serengeti.

The drive to Olakira passed through miles of panoramic views of the Great Plains before coming to a large, shady, wooded area. It is in this site that we observed, up close, the largest concentration of giraffes of our entire trip. All ages; all sizes. One giraffe had his front legs spread wide apart with his head down. Almost comical.

It is near this area that our camp was located and we realize this is definitely not the pup tent camping experience of scouting.  Instead, it is elegant in a simple, rustic way reminiscent of the colonial days of safari camping. Instead of kerosene lanterns, electricity was solar powered.

Olakira is a Swahili word meaning “star”, and to us, this place did shine.

This mobile camp is moved twice a year to follow migrations. Thus, it is small and intimate; just eight tents.  Each large tent is on a platform and has a covered porch with chairs for viewing. Inside are comfortable beds with white spreads laden with hand woven African blankets to snuggle under. It is large enough for hand carved wooden furniture and most importantly, a modest and functional bathroom. The shower works by pulling a rope which empties a canvas bucket of water which has been preheated over an open fire. The trick is using the one bucket sparingly to last the entire shower. At least we had hot water, a luxury. At the orphanage, we only had ice cold showers.

There is a common tent used for dining and congregating complete with African works of art and books. Our food was served family style and what I liked was that our guides ate with us instead of being relegated to the staff quarters.

Each evening was spent around a camp fire, star gazing and telling stories about the day’s events; getting to know each other and the countries each was from. An international gathering.

The only thing missing was s’mores.

Before retiring, we were reminded of the rules:

“Don’t go wandering off on your own without a guide – even to your rooms. After retiring to your rooms at night, don’t leave them.”

“Let’s not forget there are big cats that do their hunting at night.”

“The wild animals are not like those found in theme parks – they aren’t tame.”

There were zebras meandering around the camp during the day. We left each other alone. We could hear an animal grazing around the tents at night, sometimes rubbing his flank on our tent. A constant chewing sound replaced the silence. The next morning we were told it was a Cape buffalo.

Too bad I didn’t have the guts to immolate Meryl Streep, stomp out of the tent and stare at a Cape buffalo and yell, “Shoo!”

Now that would be a story! 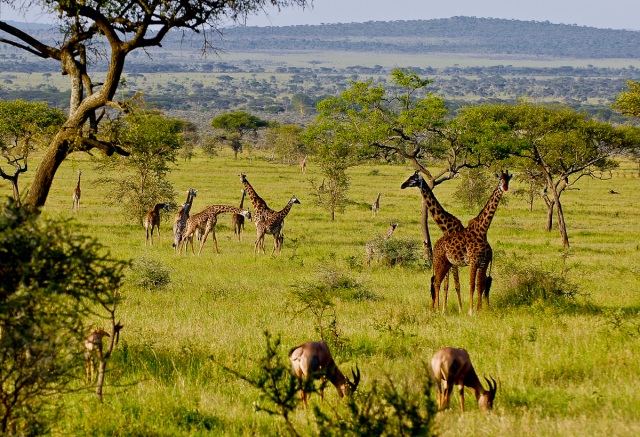 18 Responses to Tanzanian Bucket List: Tent Camping in the Serengeti