Posted on August 8, 2012 by travelerlynne 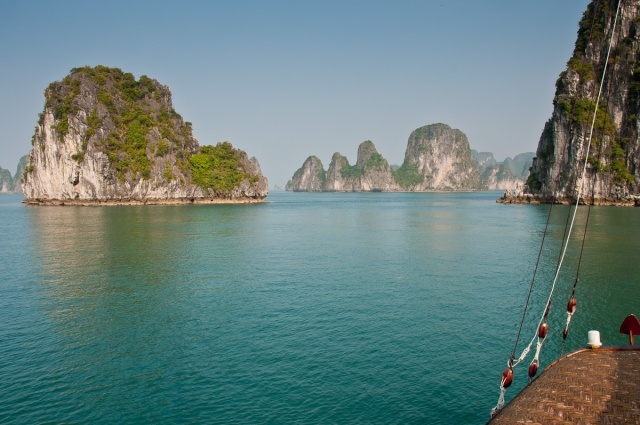 “A traveler without observation is a bird without wings.” Moslih Eddin Saad

I can describe SE Asia in three words:

It is an artist’s palette.

A profusion of color, shapes, sizes and textures, found in and on the streets, allies, rivers, lakes, temples, rice fields, and markets throughout Vietnam, Cambodia, and Laos.

Leaving the frenzy of Hanoi, we headed north to Halong Bay, a three plus hour drive that wasn’t always at a leisurely pace. Our driver was clearly behind schedule in getting us to our destination and was quite aggressive at times…ready or not, here I come, attitude. Even the men in our van winced more than once. But at times I was able to concentrate on the panorama of verdant rice fields as well as the workers in them noticing  an array of conical hats, baseball caps and towels covering their heads.  The architecture of the two and three story block houses lining the road intermittently were interesting in that only the fronts were painted. The sides were left bare.  Children were busy peddling home from school in their white shirts, blouses and red scarves.  Bicycles replaced mopeds in this stretch but the truckers were numerous. It was with enormous relief when we did arrive at the reception area and climb out of the van.  I was mistaken in thinking we would be boarding right away. Instead, we had to go through the query of instructions and paper signing and then we would eat lunch. Taken to a large dining room, we joined the masses of tourists who have shown up to do what we are about to do…cruise Halong Bay in wooden Indochinese junks. 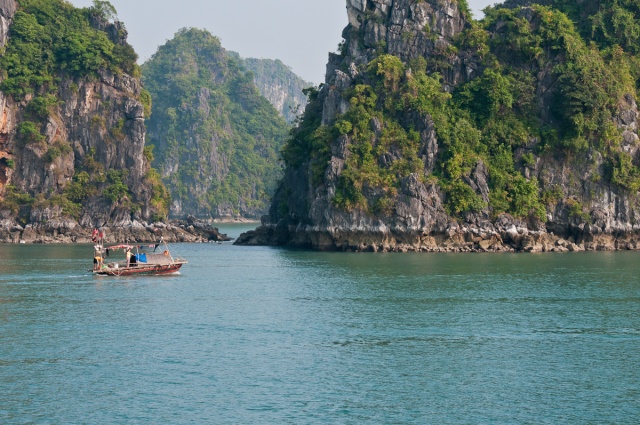 We ride in a tender out to the boat and as we board the Prince II, I glide my hand along the smooth teak of the handrail and begin to calm down since leaving the city. I know this beautiful junk is home for two nights and three days and I am preparing myself for a lovely experience while casting the frenzied incident aside.

Sipping on a cold, icy fruit drink, Ron and I sit on the small intimate deck with the three other couples on board. It is the first opportunity to take in my new environment.

Moving away from the other junks and creating our own space, the artist’s palette becomes serene as we gently glide through the pristine azure waters. We are mesmerized by the giant limestone karsts jutting out of the water that have taken over 20 million years to form. Looking at them through a haze creates a surreal atmosphere.  In contrast to the grey jaggedness, lush, green tropical vegetation cling precariously to the grains of earth that have settled in its crags… like bonsai that has been left to withstand its windswept environment, forming its own twisted and gnarled shape, without the hand of man. There are telltale signs of waterline marks on the side of these stone cliffs indicating the ebb and flow of the tides.

Located in northeastern Vietnam in the Gulf of Tonkin and part of the South China Sea, Halong Bay was declared a United Nations World Heritage Site in 1994.  Slightly less than 2000 islands dot the seascape with their wind-carved grottoes while some have caves or a sandy beach.

We navigate peacefully through these mountainous islands and no two are alike. Each view becomes lovelier than the previous.

Nguyen Trai, a Confucian scholar, poet and politician who lived 500 years ago referred to Halong Bay in one of his poems as a “rock wonder in the sky.” Nature has often been the source of inspiration for poets who in the fewest of words and syllables can describe the essence of a natural wonder.

The word Halong translates to “where the dragon descends to the sea.” According to legend, a great dragon lived in the mountains and charged towards the coast. Its long tail carved out the valleys and when the dragon finally reached the sea, it left behind the karsts. Makes for an interesting story and this is the year of the water dragon.

After mentioning this bit of trivia to the group, we are all compelled to look for the karst that most resembles the great dragon of the mountain. The Australian’s win. 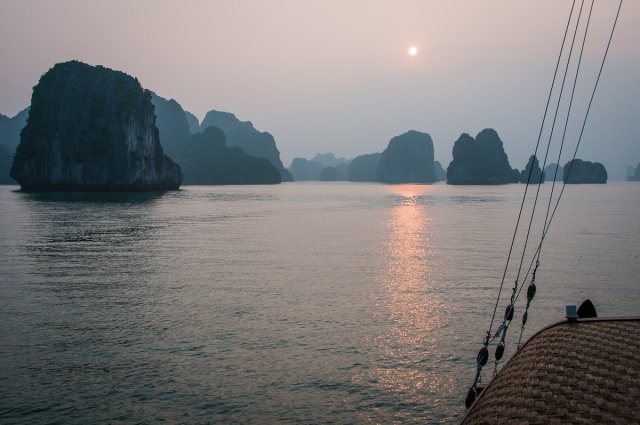