Culture is something that evolves out of the simple, enduring elements of everyday life; elements most truthfully expressed in the folk arts and crafts of a nation. ~ Thor Hansen

We just spent a lovely night at Castle Mandawa in the Shekhawati region of Rajasthan and now it is time to see the 18th and 19th century frescoes of which this region is well known. 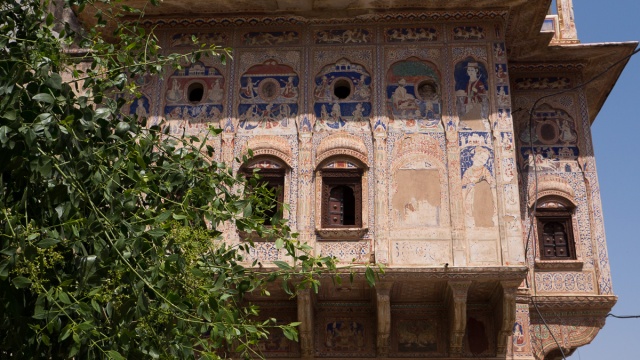 No better way to do this than by foot. Our guide, Ashoka meets us at the castle gate and we walk into town listening to him sharing his knowledge of the area.

He relates how Mandawa was a prosperous trading town in the 18th century and was strategically located on the ancient spice-trading route. Traders, merchants and wealthy business men began to settle here and eventually built large mansions (havelis). These rich business people commissioned artists to paint frescoes on their homes as a sign of opulence. 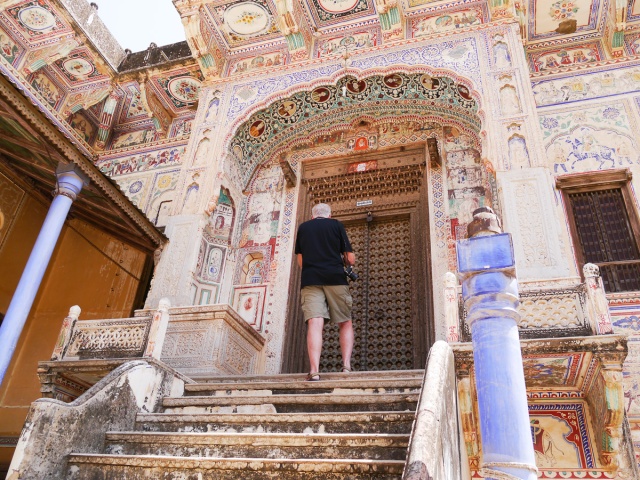 Painted havelis cropped up all over the desert landscape and today, it is considered one of the largest open art galleries because of the intricate painted frescoes.

Ashoka takes us to two havelis, one of which has residents, but we are welcome to visit and photograph. He explains that the havelis were constructed with two courtyards. Outer court termed ‘Mardana’ for male family members and the inner court termed ‘Zenana’ for females. In all the palaces Ron and I were in throughout India, there were always separate quarters for the men and women. This was no different. 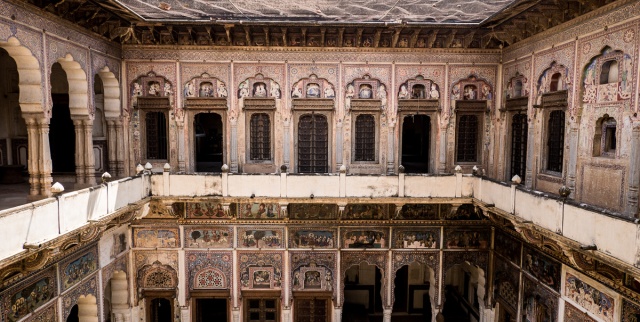 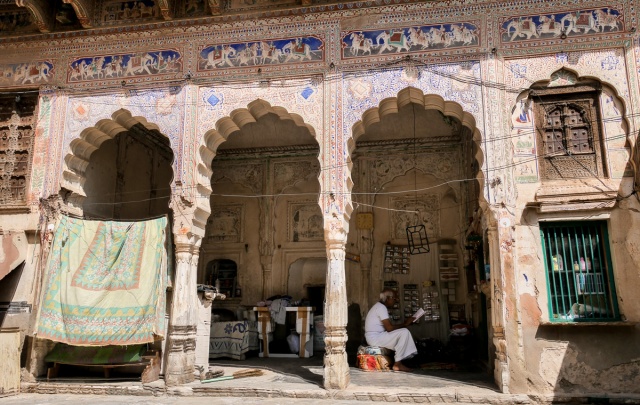 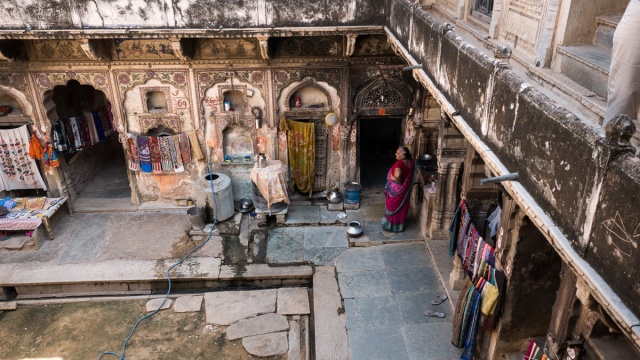 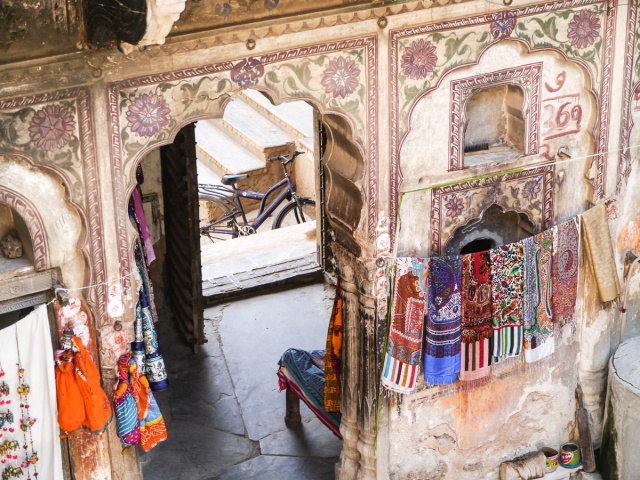 Many of the frescoes exposed to the elements have faded or eroded, but there is still a beauty of what was once there. A story book town, capturing the life and times of these people. Subjects range from scenes from the Ramayana and the Mahabharata to geometric and floral patterns. 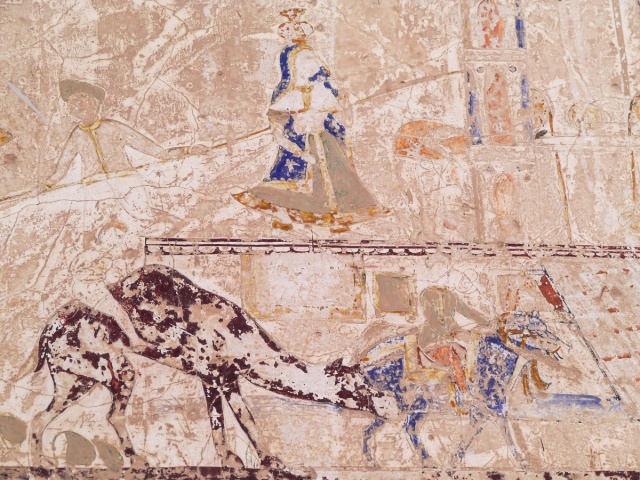 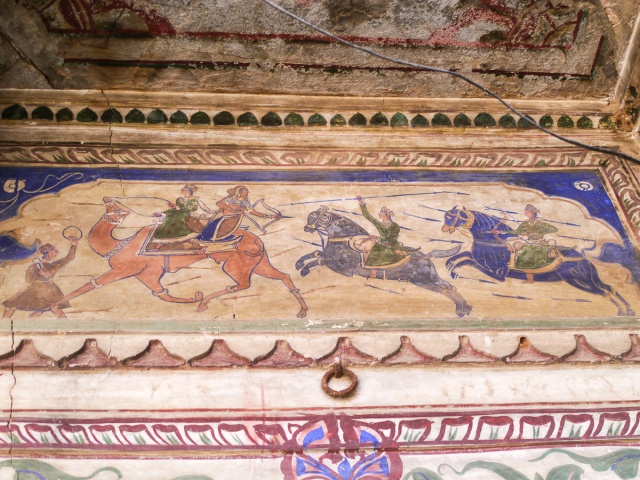 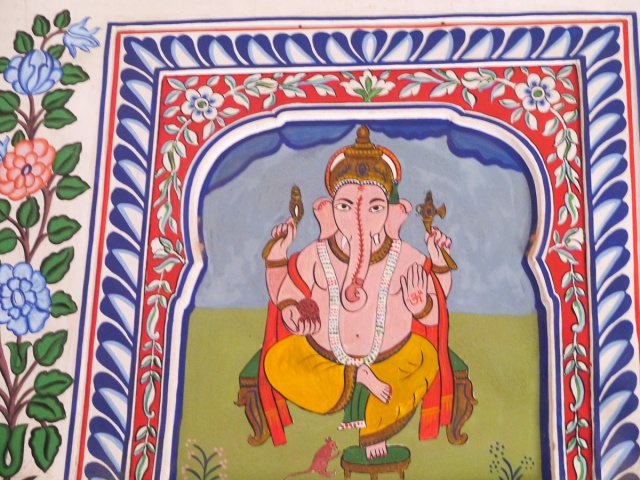 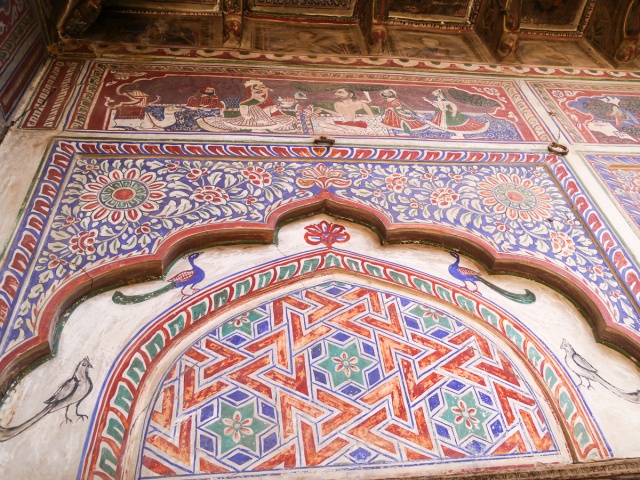 The next haveli has a caretaker as the owner lives elsewhere and keeps this one somewhat maintained. We were allowed in the outer courtyard, only. Ron was more interested in the pots and cooking ware in this one. 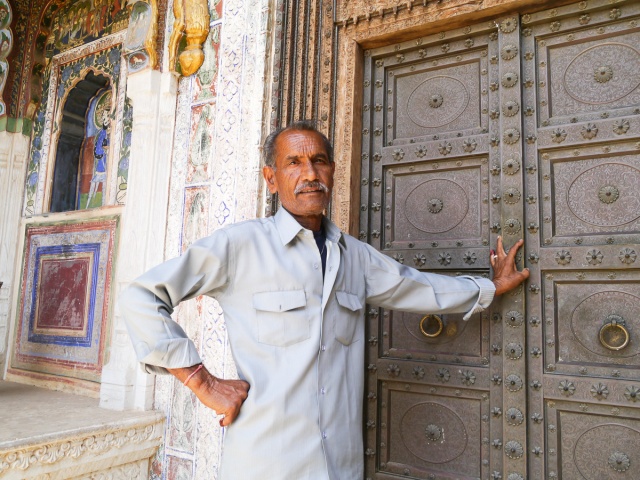 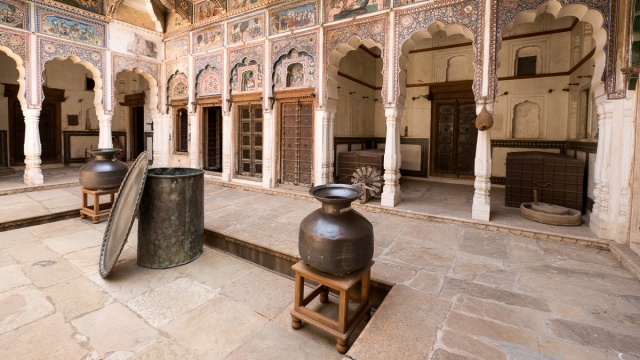 Ashoka tells us that the painters were members of the potter caste who became masons. They had no formal training in the arts, but they had an understanding of how to prepare the walls using a mixture of limewater, sugar and yoghurt. “They understood chemical bonding,” he said.

Ron and I were amazed at the immensity of these projects and how they applied the paints to a wet plaster in this arid, desert like region without them immediately drying and cracking.

Next, he tells us that only vegetable or natural pigments were used: kajal (lamp black) for black, safeda (lime) for white, neel (indigo) for blue, harababhata (terra verte) for green, geru (red stone powder) for red, kesar (saffron) for orange and pevri (yellow clay) for yellow ochre.

At one time, according to Ashoka, yellow was derived from the urine of cows that were fed mango leaves. This was discontinued after the cows became sick.

The British merchants who traded in this area told stories of great inventions such as the railway train, air plane, automobile, telephone or gramophone and bicycle. These artists had never seen these marvels, but used their imagination to interpret them and incorporate them into the frescoes. Sometimes, the number of wheels on a car or on the train didn’t make any sense, or the steam from the locomotive was drifting the wrong way, all proof that these creators were working from their mind’s eye. Some frescoes even show British officers in sola topis (pith helmet). 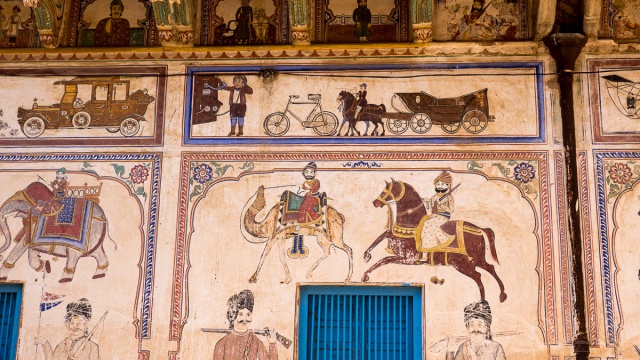 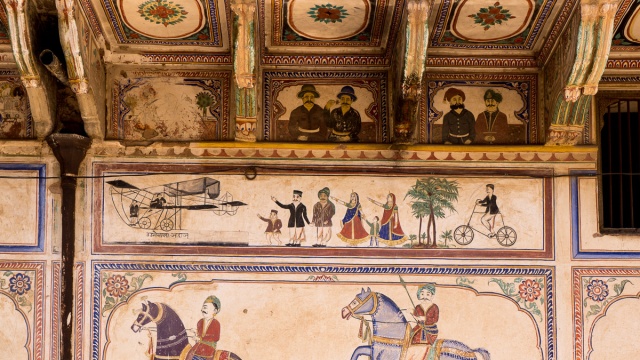 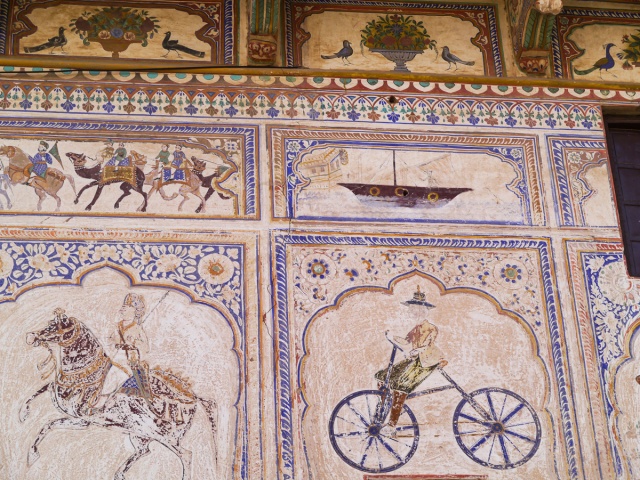 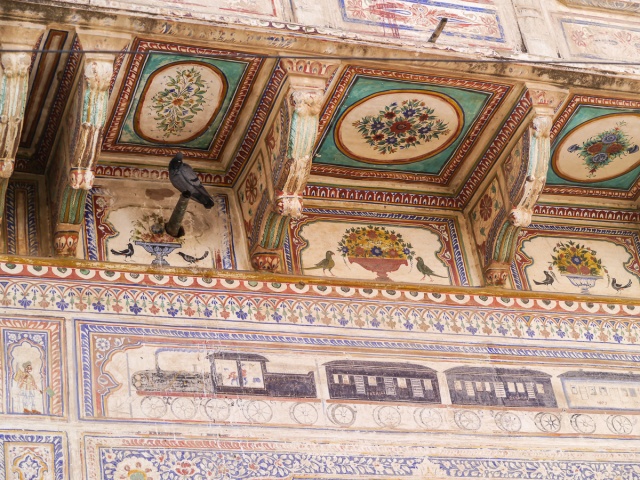 The large doors, we were told, had to be tall enough to accommodate camels who were bedded down in the men’s quarters. The small door is the people door. 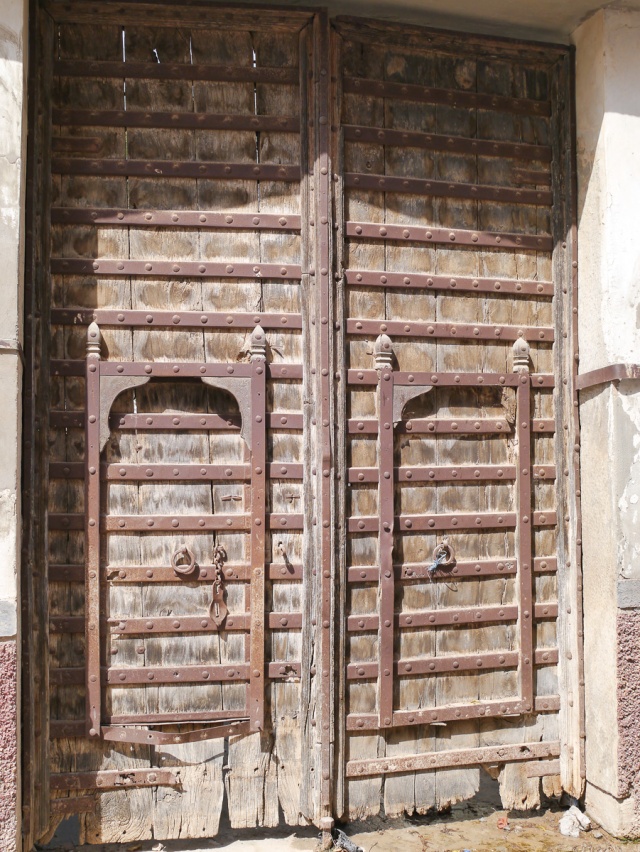 Many of these havelis are closed, neglected and in disrepair. India’s burgeoning  tourism industry sees a need for revitalizing and preserving this heritage craft region. This is a six city region and well preserved havelis are scattered through out. One just needs a guide and some walking time. Well worth it.

After leaving Mandawa on our way to Samode, our driver Rajinder takes us into Dunlod to see a haveli. This one has a small admission fee and is more like a museum. The wife of the caretaker is sitting in front of her fan, watching TV,  and our milling around doesn’t prevent her from enjoying her favorite show. 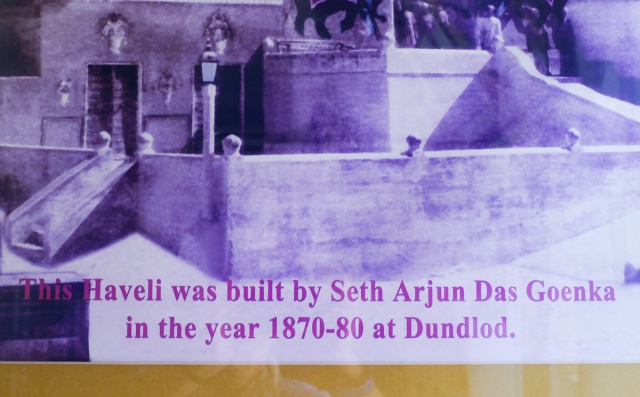 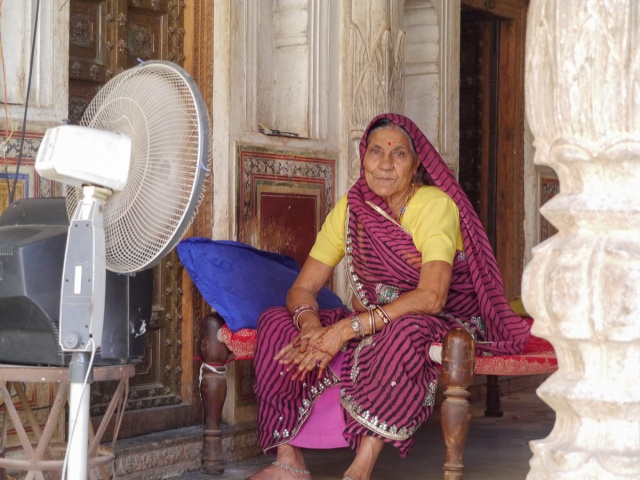 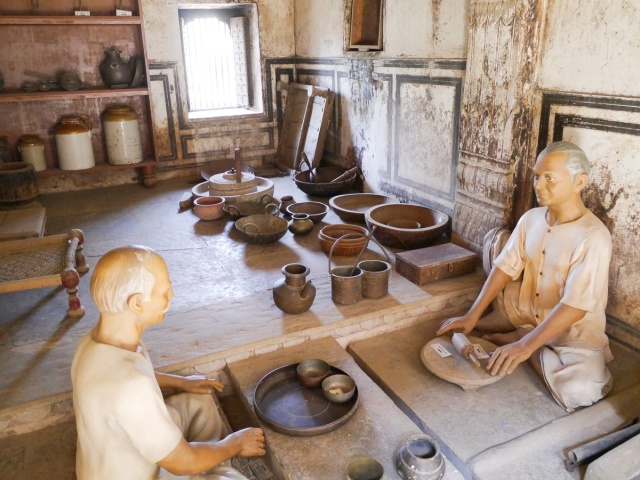 Am glad we stopped here. The room exhibits were quite impressive with castings of life like people.

Indeed. An open air story book region. Lets hope more havelis are preserved. The Ministry of Tourism claims there may be as many as 5,000.